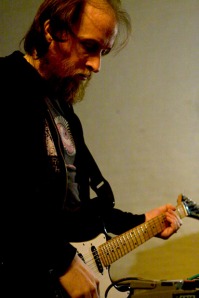 – You are from Toronto and you live in Berlin for a little while. What made you move ? How would you compare the Canadian scene to the German one ?

– We moved because we can make a living from music in Europe. Cost of living is much cheaper in Berlin than Toronto and there are considerably more opportunities to play in Germany and Europe than there are in Canada. Not that there aren’t good scenes in Toronto and Montreal, but considering the population of Germany is twice that of Canada, there are a lot more people to play to here.

– What can you tell us about your work as a writer ? How important is it compared to your music ?

– I have published a few books of poetry and while I have tried writing a novel or two, none of them have ever been published. It is important to me and enjoy doing it — although it is a much intellectually rigorous process for me than making music — but I don’t focus on it as much as music. Music is a much more accessible medium so it is considerably more popular so at the moment I don’t really have the time or leisure to expend too much energy on my writing.

– You are a very prolific artist: according to the site Discogs, you have 99 album releases under your own name and 55 under Nadja in less than 10 years. Are you happy with all of these ? Which would be your favorite Aidan baker & Nadja releases ? Why ? A lot of your releases have come out as limited editions, but are reissued later on. Why is that ?

– No, I’m not happy with all of them: some of them I think were more successful than others, some I think I have aged poorly and sound dated, some I think were recorded poorly…there are any number of reasons to be dissatisfied with one’s own work and I don’t think I’m alone in feeling that. I guess Nadja’s Thaumogenesis and my solo album Green & Cold are among my favourites, largely because of don’t fall into any of categories of dissatisfaction I listed above. And I reissue albums that I think remain successful so that people can still hear them.

– What do you think of digital releases ?

– I don’t mind digital releases — they serve a purposes — but I think they are limited. The physical object of a record or a cd can and should have an artistic value in and of itself.

– You have released lots of splits and collaboration albums as well. How did you chose the people you work with ? Does it always go well or have you been disapponted with the result (artistically and/or humanely) ?

– Sometimes I asked them, sometimes they asked me, as simple as that. Working with others allows for the possibility of creating something unexpected and I think that’s what makes for a successful collaboration. I don’t know that that has always been achieved with the collaborations I’ve undertaken — or at least the amount of unexpectedness varies — but the process has never been disappointing.

– What can you tell us about ARC, Infinite Light Ltd., Mnemosyne, and Whisper Room ? Do these projects still exist now you are in Germany ?

– Mnemosyne hasn’t existed for several years now, but it was a largely improvisational space- or post-rock trio of guitar, bass, and drums. Whisper Room is also a trio — myself on guitar, Neil Wiernik (aka Naw) on bass/electronics, and Jakob Thiesen on drums — and has a similar space-/post-rock sound (more or less, perhaps a little more elecontronic). We are still active and currently working on a new album via file-sharing. ARC is another trio, but this time myself with two drummers/percussionists, Richard Baker (no relation) and Christopher Kukiel. ARC is more about live, improvisational experince, so we are sporadically active, depending on when we are all in the same place. Infinite Light Ltd. is a collaborative project between myself and Nathan Amundson (aka Rivulets) and Mat Sweet (aka Boduf Songs). To date, this has strictly been a long-distance project, as we recorded our debut album via file-sharing, but we have vague plans of working on a follow up album in person and perhaps touring the project.

– How did you chose the songs you covered on “When I See The Sun Always Shines On TV” ? Did you have the idea of a cover album in mind for a while or did i just happen like that?

– We deliberately set out to record a covers album, yes. We wanted to show something of our sonic roots, so all those songs and bands are representative of our musical interests and influences in some way. We also wanted to inject some levity into what can otherwise be a rather overly serious genre…

– What do you listen to these days?

– You have been remixed by Lustmord. Was it purely “business” or was this collaboration based on something else ? You have made a few remixes on your side. Is it something you like to do ?

– The Lustmord remix was something Pyramids set up, so I never spoke with him. I do enjoy remixing — it can be interesting and challenging to make something new and good from someone else’s music or sounds.

– What made you start your own label/publishing company Broken Spin Productions ?

– Not to suggest that we haven’t had good relationships with some of the labels we have worked with in the past — some of them, at least — but essentially we wanted to take more control of and to see greater returns from our music.

– What we can expect from you in 2012 ? New collaboration albums or projects in the making ?

– Nadja will release a 2CD compilation entitled Excision, featuring vinyl-only and/or limited tracks, with Important Records in early 2012. Solo, I have a number of things, including an album with contributions from 18 different drummers, called The Spectrum of Distraction, coming out on Robotic Empire. As for new collaborative projects…I’m sure there will be something, but who knows at this point…