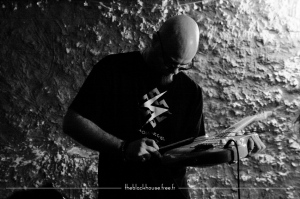 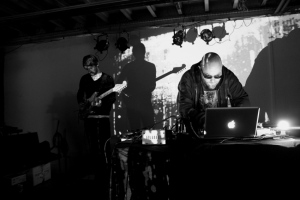 – We know each other for a pretty long time, and I think the first question I have is something I have been wondering for about the entire period of time I know you, strangely without ever asking you this. Can you please explain how you got to the names of your project (.cut) and your label ([walnut  + locust])

– (Albérick) It would be interesting to hear your own explanation for these actually. Let’s see how you perceive it first.

– I think .cut is a great concept for a name, which relates to reducing from something which is too small to be reduced, like atoms in the time we thought that atoms cannot be divided. For [walnut + locust] I am a little lost. Confining these two beings into the brackets puts them inside a closed system of some sort. Is it somewhere where the locust eats the walnut (I don’t know if it can consume walnuts)? or am I far from the correct answer?

– I like your answer. Can I use it from now on? When I started to look for a name for my project, I wanted something short so I went for “cut” which is part of my creative process with samples (cut/copy/paste). I added the (dot) as a hint to the “.com” appearing everywhere in the 1990s. [walnut + locust] comes simply from the 2 streets surrounding the block where I lived in Philadelphia.

– How did .Cut ft Gibet came to be? Were you working together since the birth of .cut? How did this project form?

– .cut started as a solo project, mostly from my frustration of playing with other people. Being nonetheless open to collaborations, it led to several variations of the name .cut such as .cut versus Mr. Malinou, .cut & Maggot Breeder… The collaboration with Gibet was supposed to be a one off shot for a semi-improvised concert in Lyon (we had 2 recording sessions prior to that). Gibet became the other permanent band member in late 2003. I don’t really remember why or how this happened.

– One of the key elements in your music on this project is the various spoken words samples. How do they affect your music? Do you build your music around the words or is it the other way around?

– Most of our tracks are rather long and repetitive. They are also narrative and it is always nice to tell a story. There is no magic formula when we record a new track. Sometimes the guitar comes first and I build around with noises and samples; sometimes I have a nice spoken word sample I would like to use and we start from there. All of our songs up to 2007 were recorded “live in studio”. Now, due to the continental divide, we send tracks to each other via internet and I assemble everything here in Montreal.

– You have plenty of releases under .cut. Some of them appear on splits with other artists and/or on 3″ mini albums, while full .cut albums exist as well. Is there a different frame of mind while recording a full album than while recording few tracks for a 3″ or a split? Does it matter to you?

– Well, in my opinion, we never actually released what we would consider a “real” full album before “Le Monstre Qui N’avait Pas De Nom”. Our first album, 2004’s “Les Nouvelles Cathédrales” was never released, although most of the songs were released on EPs or compilations. Seeing as all of these are now long deleted, we’ve been thinking of maybe finally releasing it. We have releases in most of the main formats now : vinyl, 3″ CD, CD, and even a cassette in December. I love cassettes actually. I’ve been collecting cassettes for many years and I am still very attached to the physical format. Although we’ve had tracks in digital compilations and even a live album (“A Public Autopsy”), I cannot see myself selling an album on iTunes or Bandcamp. It is not a judgement of quality, lots of great bands go digital, but I simply feel more comfortable with physical releases. I really prefer listening to music on my couch rather than in front of my laptop. So, size does not matter but format does. We are open to any offers.

– You are working on many other musical projects, yet somehow I feel that .cut ft Gibet is the more important of them all. Am I right? Aside for the different personnel, do you have a different concept or agenda behind this project?

– Not really. Well, I don’t really know anymore. For many years .cut featuring Gibet remained my main project, but with our distance over time ratio (we live 6000km apart), it is not always the case. Over the last 3 years or so, I have been very involved with Stephen as Montreal Nintendo Orkestar. (We both live in the same town.) Interestingly enough, I noticed that working with “special guests/external collaborators” in Montreal Nintendo Orkestar or Thee Virginal Brides can be very interesting. However .cut featuring Gibet only seems to really work as a duo. I don’t have an explanation for this though.

– I find your music very urban and melancholic (the majority of it, anyway). Do you think so as well? Is it a part of your view on .cut?

– Oh, really ? I think we are the best party music you can get!  Seriously now, I somewhat agree with you. Maybe most of the music I listen to is urban and melancholic? Or simply the world we live in is what inspires us in our music? Maybe our lives are urban and melancholic, and we are very depressing people? I kind of prefer it this way, mind you. I am happy not to be entertaining.

– As I said before, the year has been very exciting thus far: our first “real” full length album (“Le Monstre Qui N’avait Pas De Nom”)  was released in January,  a few nice shows in France in February.  We also have a couple of tracks on compilations (“Canadian Drones” and “Noises For Japan”). We don’t plan to play any shows in Europe for the next year or so, but you can expect something on my side of the ocean in the Fall.

– What equipment do you usually use for live shows? Do you perform frequently?

– We both use a bunch of pedals and a guitar. I also use a laptop and a few toys and tools (electric shaver, coat hanger…). We used to play quite often (maybe too often?) before I moved to Montreal. We try to book some shows every time I go back to Europe. Visuals are also a very important part of our live performances. Our first performances were accompained by some of the material found on the “Red Kross” VHS (re-released on the “Urban Exploration” DVD). We also used several short films by Peter Greenaway. The last few years, we’ve been using visuals Gibet created, using his super8 projections.

– Where do you take your inspiration and ideas from? Other artists? Sources outside the music world?

– Life in general and the world we live in are my biggest inspirations. Apart from that, we both share a huge passion for Stanley Kubrick. We are total geeks when it comes to him. So, he is also a big influence on our work.

– Finally, what music do you listen to these days?

– It’s funny (or is it sad?), but I mostly listen to the same bands I have been listening to for a long time : Throbbing Gristle, Nick Cave, Godspeed You! Black Emperor, Diamanda Galas, Low, Swans, Sonic Youth etc. I must admit I recently discovered Flaming Lips at the ATP NY festival and I am starting to enjoy them a lot. As far as local bands go, I really like Rei Rea, Thisquietarmy and Les Beyond.