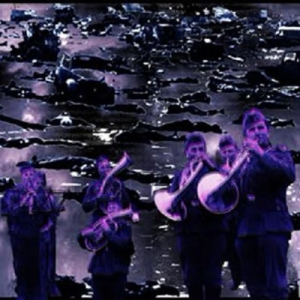 A long way was set before “333”, the album by Chicago based Arvo Zylo, before it was realized into its physical format. Like the artist himself describes, these recordings were made back in 2003, inside a closet that stood in the bowels of a rat infested house with a flooded basement (no less!), and was shaped and molded until it was released in 2009. This Narnia-meets-Fightclub scenario might sound like an irrelevant piece of information for someone who holds this album for its sounds rather than its history, yet hints of this moist background can be traced both in the cover art and, of course, in the music.

The three tracks of the album, all donning great titles, are quite long, with the track “Quicksand Eggs of a Beaten Pathos” overshadowing the other two by lasting over 30 minutes. Zylo begins with rhythmic sounds and builds a firm, even melodic ground for us to stand on, only to shatter it to pieces few minutes later, as these rhythms turn to blistering, pulsating noise. This shape shifting is something that Zylo does a lot in order to keep his audience alert. Brushing together dirty drones with water soaked sounds and eerie ambience, the opening track grows intense and hostile as minutes pass. About halfway through Zylo let the matters calm a little, thus allowing more delicate sounds of metallic hisses to surface. Later on, the music will turn harsher once again. When we get to the beginning of “Deadbeat Deluxe”, the sounds are distressing and chaotic, and Zylo adds broken electronic beats to the boiling soup he serves. “Deadbeat Deluxe” goes mental until a certain moment of Zen when it suddenly balances into a rhythmic industrial peak. Zylo creates pockets of sanity that floats in the massive, intense flood of electronic mayhem, long enough for the listeners to take a deep breath before the next dive, but not long enough to calm them down.

“Plasthma” begins with an airy, yet highly distorted ambient breeze. This track serves as a fitting closure for the album, as these relatively soft waves of distortion begin creating sonic turbulences that lead to the albums screaming end. ‘333’ is rich in texture and musical events. Zylo brings a real treat in the form of a bumpy rollercoaster ride with sharp angles that prevent you from predicting where you are being taken next; a recommended experience!