Devotion – In Love we Stand Alone 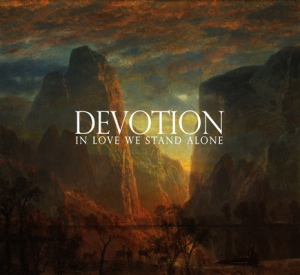 Devotion – In Love we Stand Alone

One day I’m going to meet Dani and Troy Schafer, who are now a rather newly wed couple, but by the time we get to finally meet they are probably going to be veterans in the principals of married life. We will sit down for a cup of coffee and talk about things that are going to interest the future us. Then one of them is going to say something that will bring this album to mind, and I’m going to say – “Yeah, like that album you once released as ‘Devotion’, remember?”, and they will smile and immediately remember this article, reviewing this album. They will say – “You really liked that album, didn’t you?”, and I will say – “well, yeah. I think it had some unique features, concerning the music you two do, together and alone”.

“Well, in the first listening you let the music sink in and appreciate how romantic this album is. Not in the sense of manifesting the love of the couple who made it, but in how vast the emotional drive behind this album is, and how driven it is towards the sublime.
But then you hear it one more time, and the dramatic folk songs, lead by Dani’s enchanting voice (at this point she will say that’s not true, but it is) and backed by Troy’s singing and music, is also very intimate and naked. On the title track – ‘In love we stand alone’, for instance, the introduction can show you the space where the two schafers stood and recorded with vivid colors and brutal simplicity. ”

Then I would probably go on about the atmosphere, both caressing and distant, and that the word ‘Folk’ probably won’t cover all musical virtues of this album. I would say that the opening track – ‘Guardian’, is my favorite, as it brings both dark, wintry songs about operatic love stories, and grave, down to earth musical reply to each divine call.

I would then realize that Dani and Troy are not listening to me anymore. They would probably go on to record their next project. Luckily they left some money to pay for the coffee, as I have enough friends over here that let me pay for them.