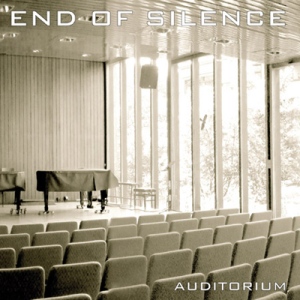 Time might be flying when you are having fun, but I am sure we all know that feeling when time crawls almost to a complete freeze when you’re waiting for something really big to happen. Seconds and minutes take eternity to pass, and your mind is sliced between actually experiencing reality and shaping that big thing that is coming for you in your imagination. So basically that is what happened to me when I played ‘Auditorium’ by End of Silence for the first time. Witnessing the slow awakening of one lonely snare, declaring what must be terrific storm that is ahead of me just few more minutes into the first track, I can’t help but wonder how shaking this is going to be when it finally comes. My friends, End of Silence let me boil in my own expectations while they are pulling my nerves away during the first minutes, and then, when it’s finally time, they shake my body and blow my mind.

Rattling their bone boxes between intense, fuzzy noise, drum avalanches and vibrating guitars, Achim Friederich, Manuel Schaub and Matthias Weigand twist and bend the listener’s mind with fluid sounds that crystallize with dark magic into crusty, dirty blasts of doom and gloom. ‘End of silence’ rises from the almost mute beginning and blasts a typhoon of sounds and tastes, and this is just the first part of the album!

What’s next? If the first movement grew to be a blast furnace, the second movement is a hypnotic wave therapy that can knock you out of your balance with small but oh-so-persistent vibrations. Again, there is a fine, but very sharp line between the realms of vague, silent echoes and blizzards of distortions and war drums, and ‘End of Silence’ plays on that fine line as if it was another guitar string on their set.

‘Auditorium’ is a paralyzing spectacle of doomed noise in the shape of breathless clouds. It’s as demanding and challenging as it gets, and since I know you wouldn’t have it any other way, this could be a perfect album for the perfect storm that will open 2013. Since this year should never have begun in the first place, it’s only a win win situation (once you come to terms with the fact that the world did not end, but that’s a different story for another time).