Fanum / Karna – Something Else 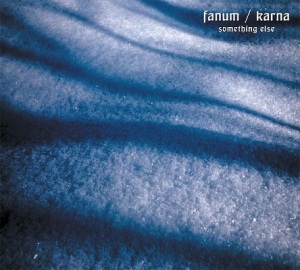 Fanum / Karna – Something Else

There is some sort of an aura, boiling below the surface of these two tracks, each composed by one prolific project. Going through these fifty minutes of music over and over again, I can track the changing of the landscape as sounds evolve or shift, but this album, titled “Something Else”, has a certain texture that mark both tracks with the same ominous, yet obscure message that I can only describe as held back, maybe dormant sense of urgency.

“Afterworld” begins with a distant war siren that is slowly being swallowed by a brutal hum that orders a stricter rule in the form of a slowly breathing, dark and dense drone, leaving nothing but scorched remnants of distorted debris behind. This is indeed a form of an afterworld, a post apocalyptic desert where Karna attempts to erect musical monuments who crumble to dust as soon as they fully stand.

If urgency was infused to “Afterworld” by the cry of the siren, on “Final” Fanum begins with a long, mind piercing shriek that pushes the slow, wretched drone forward like a pebble skipping on heavy tar water. Halfway through this track the pebble becomes a heavy rock and Fanum sinks and takes us down so fast that my heart is almost breaking out of the chest. ” Zhelezobeton never fails to deliver unsettling sounds”, I remind myself. How true.

“Something Else” offers a room with a view down an abyss and what a view it is. Stare into it. Take a good long hard stare.