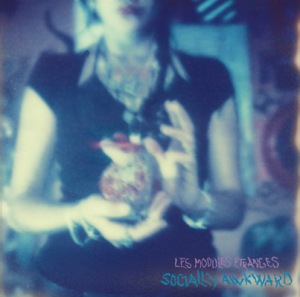 The forth album by the restless, ever energetic Les Modules Etranges might not surprise their fans with a dramatic change of direction due to an overwhelming musical illumination, but it will surely keep them satisfied with the consistent musical output and never ending stamina. Sixteen tracks, ranging from mere 40 seconds to five minutes, are all brought in an in your face, dark and catchy songs that easily stays in the mind, spicing it with high voltage female singing and the kind of electronics that vibrates between the furious and the delicate.

You can read from the songs’ titles and get a vague idea about what’s going on in this album textually. On the second song, titled “You. Me. Intercourse” there is a certain amount of sleazy beats that pound through the sweet, even tempting voice, repeating the suggestive song title over and over again.
The most important and memorable aspect of this album is this fine line between the sweet, which manifests itself not only in the vocals but in parts of the music as well, and the furious. Les Modules Etranges are putting their mark on these territories, with ‘Socially Awkward’ being another assault in their arsenal.