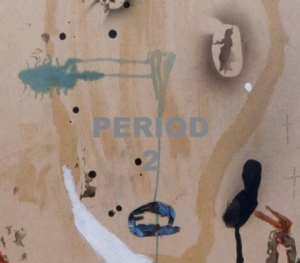 I love bands or projects that challenge the disciplined traditions of music genres, especially when it comes to black metal. By saying this I have to stop and explain that this is certainly not a black metal album, but it has many wonderful clear points where the shadows of the dead forest, from where black metal is usually being played or felt, are challenged with an unpredictable, harsh and chaotic form of monstrous howling to the sounds of terrifying drum beats and outright demented guitars.

But this is not all. ‘Period’ (Which are Charlie Looker and Mike Pride, assisted by Chuck Bettis, Darius Jones and Sam Hillmer) seem to take everything about sludge, death and noise, and burn it to the ground with the fire of free Jazz in order to wear the ashes while playing music in what sounds like an insane asylum built on an old native cemetery. If the second track (conveniently titled ‘Four’) was all malicious and a very vivid and colorful version of black, the fourth track (Titled ‘Nine’, you get the idea) is much more ritualistic, abstract and haunting. The fifth track goes back into the realms of hard core and noise, with a two minutes long explosion of inhumanity and utter mayhem over my speakers. I am listening to this epiphany and I can see and feel how great machines are being devoured by greater machines.

Public Eyesore is a fantastic source for interesting and refreshing artists, and this deranged project by Looker and Pride is no different. My head is done for tonight, after listening to this album three times, and it’s barely noon. I think there should be a warning label on albums like this one, something that reads – “Heaven hurts”. Get this album!