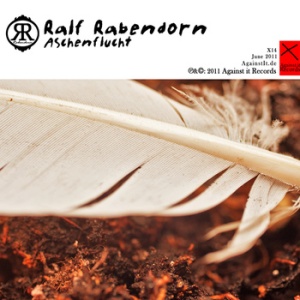 Label – Against it records
http://www.againstit.de/

Ralf Rabendorn is a professional guy. He knows who to get the sound to be exactly like it needs to be, and he knows how to make the music it self be as high quality as possible. While both of us can enjoy music that sounds like it was recorded in the basement with a computer microphone (we talked about this once, I think!), it’s interesting to see him take a step from that kind of music, as he puts a lot of effort to sound as optimal as possible. Aschenflucht is such an album, consisting of 13 tracks that blend together like a wasted dream, prove the high standards and results that Rabendorn aim for, and achieves.

In this wonderful, dream-like, state, Rabendorn phases and shifts between the severe, apocalyptical atmosphere of David Thrussell’s Voice of reason, as he develops the demanding character of a dark preacher, standing before a background of eerie waves of sound, like on the track Poison, for instance, and the multi layered, haunting moments, such as the one on “Wartend auf Entscheidung”, orchestrated with intense string sounds and drums. It seems as if a story is being told throughout the 13 tracks, with a disturbing soundtrack that creates an almost insane atmosphere to it.

The entire album seems to breathe and turn as minutes pass, with the mysterious voice of Rabendorn marching in front, in order to keep the listeners uneasy. “Rochade” is perhaps the most abstract and disturbing track on this album, bringing it’s creator’s full power to be demonstrated. “Aschenflucht” in it’s entirety is a recommended experience of emotional shifting musical hallucinations.