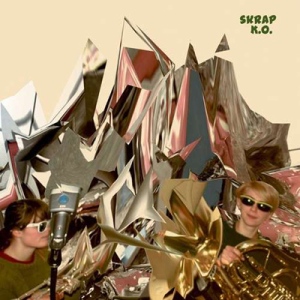 The acid-meltdown visualization that can be witnessed through the cover art on this album tells, however briefly, the tale behind “K.O”, the debut album by Skrap. So what we have here is the positioning of Anja Lauvdal and Heida Johannesdottir inside of a room with musical instruments and the possibility for electronic mayhem. They did not fail to deliver a warp 8 fly through anything and everything between distant piano melodies and ill bringing, distorted bass-amps drones.

Lauvdal and Johannesdottir’s go through broken electronic poems, like the opening “Knekt”, only to transform into a dense battlefield of glitches and bass explosions. With each track being pretty short (between 40 seconds and few minutes), one might imagine this rapid shift through styles might prove to be a mistake, yet K.O works really well as one long track, examining itself endlessly with inner electronic conversations between the two artists. If this is what their conversation sounds like, I want them to keep talking to me some more.