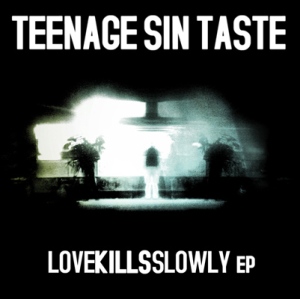 Teenage Sin Taste’s album has a constant, intense beat. This beat might change a little between each song in the album, but nevertheless it stays dominant, making the heart go faster in order to even up with it. With this intense musical heartbeat, “Love Kills Slowly” burns itself pretty fast (Just under half an hour) in a extravagant blaze of glam and dark sex appeal, enforced by electric guitars and electronic sounds, hammering above a well thought of, yet cold sounding drum. The result is, in general, exciting, yet at some points the album hits some lower moments, especially because of what sounds like never ending copy paste loops that build each of the songs in it. While Teenage Sin Taste manages to infuse these loops with high energy, sometimes, in my humble opinion of course, you need to either add something to the boiling soup, or burn even more energy with what you have.

Adrenaline opens with the charming voice of Adelaide Knees, singing to a powerful music that gives a good introduction to this project. Along with a powerful voice, the guitars are uncompromising as well and make this song leave traces of fire behind it as it ends.
The next song, “Some girls are darker than others”, while still having the same restless upbeat frequency, has much more limited singing section, resulting in an endlessly repeating itself declaration that, well, some girls are darker than others. It is a slightly weaker than the beginning of the album, yet I’m pretty sure it can gather many positive reaction, as it resembles a slightly dirtier version of a Chemical Brothers track. It’s not a million dollar sounding track like that music project, but I actually prefer it this way.
“Love Kills Slowly” is a great song, bringing to mind bands like The Jesus and marry chain, with more updated, gloomy motives. The only downside of this complimenting comparison is that Teenage Sin Taste now sounds a little cleaner and thus lose a little of the potential power of this album.

“Love Kills Slowly” remains on this high level energies, bringing vague sexual suggestions and sweet, venomous sounds alongside dirty guitars and drums. The three remixes are great, actually. The two “Love kills slowly” remixes are not letting go and keeping up with the same hammering beat, while the fantastic “12 stories” is surprisingly slower and more dramatic. These seven tracks offer a taste (sinful or otherwise) of what this musical project is capable of, and should serve as an interesting experience to fans of this sort of music.