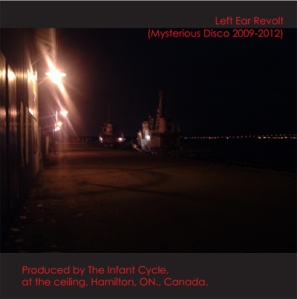 Massive Underground album releases are forever placed somewhere in the damp space between total public ignorance to underrated bands and the mere bombardment of home made editions of 20 copies per album that are distributed among friends. Sometimes it’s even both. I read that the Infant Cycle had appeared on about one hundred different releases prior to this compilation of rare materials, and I wonder about these releases as I am listening to this great collection of eerie drones and almost ritual, dark urban peculiarities.

The sounds on this album come from sources that vary from Trombone to Birdcage, and while The Infant Cycle explores these sound combinations it creates dark corridors of echoing ringing in the process. It’s a haunting experience, and if you take, for example, track number 5, as it slowly pulses through infinitely feedbacked sound waves that somehow manage to both sooth the mind and terribly taste it as well, it’s a hypnotizing experience as well. Highly recommended.