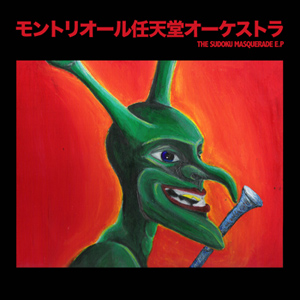 As I have probably said before, The Montreal Nintendo Orkestar, the moniker for the Duo of Alberick and S.Cibo, Keeps surprising with Montreal (Well, obviously) on 2009. The three tracks, all bearing the name that flirts both with the Comical and with the macabre, offer 3 experiments with the various instruments used by these guys. I try to take guesses whether these were recorded live or edited, and my guess goes towards live recording, considering the dynamic changes and overall feel. If I am wrong, then this mistake gives much credit to the Orkestar and the way their music flows.

The Great Origami Lobster begins with a rumbling dawn, as music starts to pile up with pulsing heat waves and soft core psychedelic turns. Above the glowing drones we can hear the sharp piercing of electronic tweaking that bring contrast and taste to the boiling track. The almost church like space that is opened via these sounds fade slowly dies, only to make place to another world altogether.

The harp like beginning of the Orkestar’s love story with a dead nurse turns the surrounding into a magical heaven of toy sounds. I can almost imagine a Cocteau Twins track being translated into the certain means of music in the hands of Alberick and Cibo. A charming moment without a doubt, it then explodes in a very violent disintegration, as we are reminded where we are standing, what world this really is, and that, in fact, the nurse is dead.

Cadavre Exquis 2, a short ending to this recording, is darker than the previous two, crawling over low, furious drones and pulses. If there is a masquerade in here, then we can see the real faces behind the masks at this short part, after we have seen the glorious disguises, bright colors and heavenly sounds. This is a lovely album, perhaps too short, but usually we get small doses from [walnut + locust], and this method seems to work, on me, at least, as I come over for more each time.