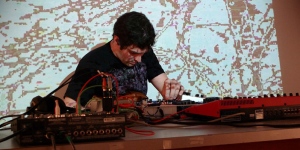 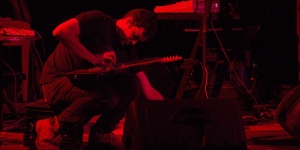 – You sound has changed a lot between “Non-household Items” and your new track on the “Canadian Drones” compilation. I know there is a 10 year difference, but how do you explain that ? Was it something intended ? Have your influences or your motives changed ? How do you see yourself 10 years from now ?

– (Etienne Blythe) The first few years (I guess) were a gradual progression that any musician goes through. Things then started chainging when I began playing a few live shows. At first (then being electronic music) I was trying to emulate in a live setting what I had been accustomed to sequencing and programming on the computer or laptop. I found this really difficult to pull off live. I was compromising and I guess it showed a little.

After a few live shows of this, I went through a transition of changing how I approach creating music. I basically “started fresh”, though still retaining old influences. I just got to jamming on my own with minimal gear and finding new sounds and new ways to create old sounds. I couldn’t build layers as densely as I could before with unlimited computer resources. I think I figured out eventually that limited resources spurr a bit more creativity and how to better use them. At least I think this is true for my own style of playing. Eventually I got to a point where I was comfortable to play shows under the same name, but a different sound. It’s great playing and not having to worry about 46 layers of sound matching up!

There’s still some compromise, but at least now I can juggle it!

In 10 years? I have no idea how to look that far ahead! Doing the same! Maybe a bit better at “proper” playing, though, for when I need it. I’m not musically trained. I don’t think it’s necissary for my kind of music most of the time, but occasionally it would help!

– You seem to play live shows more often over the last 3 years or so. How is that ? What part does improvisation take in your live performances ?

– Playing live is great! I can’t see myself stopping!

Improv plays a big role, but not 100%. If I’ve got a couple shows coming up and want to play a new set, I start off by plugging my guitar, synth and pedals in and then just randomly create ambiences for an hour or two. I record nearly all of my practices. Even the rubbish ones! Over the next day, I listen to the recording (while work or something) and take note of interesting parts. The following evening, I play some more but this time focusing on the interesting bits. Often some new stuff, too. Always recording. I just keep doing that for about a week and unless I’m super distracted, I usually end up with something much more focused. I freely borrow passages and techniques from past sets if I think they will fit. For the show itself, the focused set is fresh in my mind, but I will often improvise the sonic spaces between the main 3 or 4 “parts” of the set. Sometimes during the main parts too!

– You’ve also played live shows as a member of Dora Bleu. How did this happen ? What can you tell us about Dr. Strangelove ?

– Playing with Dora Bleu started off unconventionally I think. My friend Alberick (who also happens to book many of my shows) introduced me to her after one of my sets and I guess after a bit of conversation we sort of decided on the spot to play a bit together (including Alberick, as .cut)! I had heard *of* her music, but never actually heard it! The first times I really listened to Dora Bleu songs was when we were rehersing for our show, which is why I think it was unconventional. The three of us mesh really well, though! We haven’t played nearly enough shows together. At least by my own greedy standards!

Dr Strangelove started off as a duo between .dot (laptop + effects) and Arvo (violin + effects). Later I was asked to join in as guitarist! The sets are almost all improvised ambiences, drones, soundscapes and “post-rock”. I think even with our difference in instruments, we end up with something that works really well!

– Which Montreal-based bands or artists would you recommend and why ?

– Oh wow… there are just so many! I’ll refrain from mentioning the big international names. Bands I really enjoy seeing like KANTNAGANO, Hrsta, Shalabi Effect, Kvik, as well as others I both love and find hugely influential! The Montreal Nintendo Orkestar, thisquietarmy, Set Fire To Flames and Dora Bleu! Ghost Limbs (now disbanded) also had a tremendous influence! There’s also a great electroacoustic/glitch scene here in Montreal.

– What made you start building your own pedals ? How does it feel to know that some members of Godspeed You! Black Emperor and Montreal Nintendo Orkestar use your pedals ? Any other “notable” customers ?

– I used to tinker with electronics (like those 200-in-1 kits) when I was young. Then that took a back seat for a solid 15 years. Came back to it when I started having fun circuit-bending pedals and cheap sound toys! At first I was only building known circuits from schematics online. Partly from financial reasons, partly to see to what extent I could push the design. I was building toy synths as well as effects simultaneously, so I’d often design weird crossbred monstrocities out of the two knowledge bases! I guess after a time of building totally weird and totally unmarketable effects, I sort of filled a small niche for some experimental musicians.

Later, musicians I was already friends with found out I was keeping these effects for myself, or word drifted a little ’round town. All of a sudden I had a few customers! It’s great that bands such as these are so supportive of local artisans and builders! I’ve been selling a few of these online too, which people seem to enjoy. I don’t know of any “notable” customers, but maybe some of them are well-loved in their own respective cities too!

It’s really interesting seeing a band or musician using one of your own effects or synths! Maybe I can learn a thing or two. In the case of Godspeed, it’s kind of neat that after more than a decade of being a fan, I now find myself (indirectly) influencing how they sound. Even if just a minuscule bit.

– What can you tell us about your work as a photographer ? Argentic versus digital ?

– Photography is one of those unexplainable things. I don’t really know why I do it. At first I was enjoying the results of photography, like seeing how much detail I could get out of a macro shot, but now I’m really enjoying the process itself. I think shooting with film encourages you to carefully pick your subjects and measure the conditions. You can’t snap away 5 shots in a second like you can with digital. I find that like my music, I find much more pleasure in being limited by my medium, and then pushing that medium farther and finding new creative uses for it. Happy accidents are another thing! Sure I could use photoshop to add sprocket holes to a picture, or fake cross processing, but with film, you don’t quite know exactly what you’re going to get! Getting a developed roll back is like opening a present!

My old SLR is now my always-with-me camera. Sometimes I still pick up my dust-gathering DSLR if I want pristine clarity, but these days it’s not about clarity at all. It’s about being more involved with the process. Kind of like cooking a meal yourself won’t give you something as nutritious or tasty as the restaurant, but at least *you* made it!

I think these metaphors can be applied for music, too.