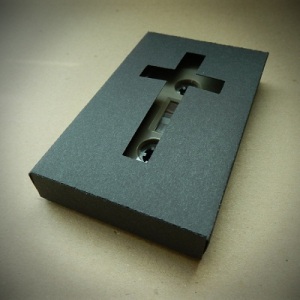 First Eric Quach took one of the best musical names to himself by creating thisquietarmy, then he began making drones that are literally full of wonder, and then came this release, which is one of the best looking cassette release that I have seen (in my private opinion, of course). What else can be said in front of this altar? Thisquietarmy is a mighty servant of warm, somber and angelic drones that evolve throughout the four passages of this album into a dense sun of white light. It begins softly and almost in a comforting manner as we go through the first part, but if you stare into the sun it may burn your eyes out, and something similar is happening into then end of the fourth and final part. Do I avert my gaze from this? Hell no. thisquietarmy knows how to make these harshest of drones so they feel sublime and irresistible.

This release is limited to 99 copies and was released on September 27th. I hope you can make it and get one for yourself.