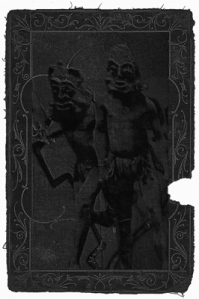 Another peculiar release by the never stopping Brave Mysteries label, “Candelora” is a fascinating album by composer Stefano Iannone. The ten instrumental tracks of this album are all carrying a familiar, nostalgic aroma to them, with different musical styles that spread “Candelora” to ten different musical areas. Together, Iannone’s project can be described as analog synth-based instrumental prog music, with an eerie apocalyptic feel to it that keeps the listeners on their toes in anticipation for the unknown, because after two tracks it gets clear that nothing is going to be predictable on this album.

Each track on this diverse album offers a different approach in which Iannone thinks his music. Sounds that resemble an early seventies prog music, on the track “Post Partum”, for instance, are replaced by more glamorous tracks and influences, although throughout the entire album, we constantly hear a soft, almost sublime level of occult sounding music that stirs the entire formation of music, giving it a really nice edge. This isn’t some sort of pseudo gothic kind of occult music, but rather something old and mysterious that gives boost to the rest of the music.

There are voices as well, on “Candelora”, which is the last point at end of the tunneling road of this album. These voices collide and whisper together, forming an apex at the closing highlight of this dark mass music, and sending the album into silence. Not surprisingly, “Candelora” (The album) is another fine release by the fascinating label Brave Mysteries, and serves a great introduction with Stefano Iannone’s music.